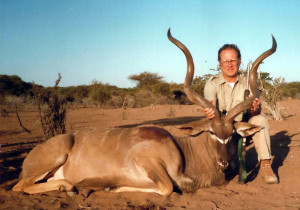 Founder of Brown Precision, the late Chet Brown, with one of his many African trophies.

Inventor of the Fiberglass Rifle Stock

When Chet Brown pioneered the concept of a fiberglass rifle stock in the early 60's, he had little idea of the impact his new creation would have on the direction of the firearms industry a quarter of a century later.

Brown's "synthetic stock revolution" first gained a following with benchrest shooters who welcomed the idea of having a stock that was absolutely stable in any weather or climate and much lighter than wood.

But it was the hunter who would ultimately reap the greatest benefits of Chet Brown's new lightweight technology.  Brown Precision can build an extremely accurate hunting rifle weighing under 6 lbs, that will consistently outperform traditional wood stocked rifles 3 or more pounds heavier.

From materials to techniques, nobody has had such an impact on how rifles are built today. Some examples of these are:

In addition to these, many other materials and techniques have been tried and rejected. There have been many more failures then successes. It is because of the failures, not the successes, that Brown Precision has been able to stay at the forefront in this industry. Our research and development is quite extensive.

You have our word we will not bring anything on the market, or offer anything in our line, until we are confident it works.  We aren't concerned about making a quick buck.  Instead, we want to continue bringing you only top quality products.  By setting our standards so high, you can be sure that will happen.